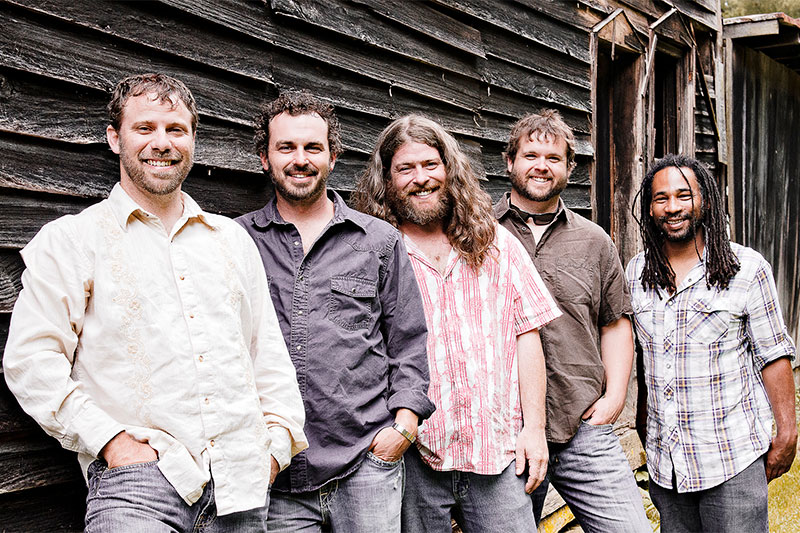 As you can probably tell by their name, Big Daddy Love is no gentle string quartet. Their music has been described as “a blend of rock, bluegrass, southern soul, and psychedelic jams.” One reviewer characterized them as “a band with teeth” (fortunately in both a literal and metaphorical sense). Identifying a single genre for Big Daddy Love is nearly impossible; all five members are comfortable playing almost any type of American music. Collaboratively, the band produces a unique sound that they have long referred to as “Appalachian Rock.”

Big Daddy Love (BDL to many fans) has released four CDs, most recently Live at Ziggy’s and This Time Around. One reviewer wrote, “Big Daddy Love is a force. The festival scene has been eating them up. If you haven’t been able to check them out yet, then you are missing out. It’s a foot-stomping good time at every single show, and they are the nicest guys I have met in music.”

The quintet, based in Winston-Salem, North Carolina, has played well over a thousand shows over most of the country.

Along the way, they have played venues of all sizes, from listening-room coffee houses to the 20,000 seat PNC Arena in Raleigh, NC. Their festival resume ranges from local favorites like The Big What to larger regional festivals such as Bristol Rhythm & Roots and the premier southeastern festival, FloydFest. In 2010, BDL won FloydFest’s  “Under the Radar” contest, which recognizes the best up-and-coming band of the festival.

The music is only one aspect of the BDL experience. A close-knit community of fans has developed into an extended BDL family, many of whom travel throughout the southeast for multiple shows and are a huge part of what makes Big Daddy Love successful. “We’re constantly amazed by how many people have jumped on board with us and do so much to help us in every way possible,” says banjoist Brian Paul Swenk. “Whether it’s Kickstarter donations, giving us a place to stay on the road, or even giving their CDs away to friends and coming back to buy another, we’ve learned that it takes hundreds of people to help a band find success in today’s music industry.”

Nearly a decade ago, Jackass Flats began their journey as a bluegrass band chasing the scene up and down the east coast: country festivals in the middle of nowhere, bars, dives, late nights, busking in the cities, life in a van–these things will leave you with stories to tell and that’s exactly what Jackass Flats did; releasing two acclaimed albums of original songwriting: “Purgatory Mountain” and “Greetings From Jackass Flats”. The boys kept the old van, but soon found themselves playing the region’s premiere stages and festivals.

As Jackass Flats closes in on a decade of existence, they’ve expanded their line up to include drums, keys, and pedal steel–propelling their sound from string band to “full tilt Americana juggernaut”. With so many instruments at their disposal, the typical set finds the band everywhere from bluegrass, rockabilly, honky tonk, country, western swing, all with the energy and edge that has made the Jackass Flats show a must see.

In June of 2011 the boys released their album, “Rusty Feeling.” The album was recorded and produced by Bobby Read (Bruce Hornsby Band, Keller Williams). An album whose songs range from raucous and rowdy bluegrass, to the textured and melodic sounds of progressive (non-nashville) country